Organ donation should neither enrich nor impose financial burdens on donors. We describe the scope of health care required for all living kidney donors that reflects contemporary understanding of long-term donor health outcomes, propose an approach to identify donor health conditions which should be covered within the framework of financial neutrality, and propose strategies to pay for this care. Despite the Affordable Care Act in the United States, donors continue to have inadequate coverage for important health conditions that are either donation related or may compromise post-donation kidney function. Amendment of Medicare regulations is needed to clarify that surveillance and treatment of conditions that may compromise post-donation kidney function following donor nephrectomy will be covered without expense to the donor. In other countries lacking health insurance for all residents, sufficient data exist to allow creation of a compensation fund or donor insurance policies to ensure appropriate care. Providing coverage for donation-related sequelae as well as care to preserve post-donation kidney function ensures protection against the financial burdens of health care encountered by donors throughout their lifetime. Providing coverage for this care should thus be cost-effective even without considering the health care cost savings that occur in living donor transplant recipients.

Statement of the Declaration of Istanbul Custodian Group Regarding Payments to Families of Deceased Organ Donors.

Governmental and private programs that pay next of kin who give permission for the removal of their deceased relative's organs for transplantation exist in a number of countries. Such payments, which may be given to the relatives or paid directly for funeral expenses or hospital bills unrelated to being a donor, aim to increase the rate of donation. The Declaration of Istanbul Custodian Group-in alignment with the World Health Organization Guiding Principles and the Council of Europe Convention Against Trafficking in Human Organs-has adopted a new policy statement opposing such practices.

Payment programs are unwise because they produce a lower rate of donations than in countries with voluntary, unpaid programs; associate deceased donation with being poor and marginal in society; undermine public trust in the determination of death; and raise doubts about fair allocation of organs. Most important, allowing families to receive money for donation from a deceased person, who is at no risk of harm, will make it impossible to sustain prohibitions on paying living donors, who are at risk.

Payment programs are also unethical. Tying coverage for funeral expenses or healthcare costs to a family allowing organs to be procured is exploitative, not "charitable." Using payment to overcome reluctance to donate based on cultural or religious beliefs especially offends principles of liberty and dignity. Finally, while it is appropriate to make donation "financially neutral"-by reimbursing the added medical costs of evaluating and maintaining a patient as a potential donor-such reimbursement may never be conditioned on a family agreeing to donate.

Financial Incentives for Living Kidney Donors: Are They Necessary?

In the face of the perceived failure of altruistic organ donation programs to generate sufficient kidneys to meet demand, introducing financial incentives for living donors is sometimes argued as the only effective strategy by which lives currently lost while awaiting kidney transplantation might be saved. This argument from life-saving necessity is implicit in many incentive proposals, but rarely challenged by opponents. The core empirical claims on which it rests are thus rarely interrogated: that the gap between supply of and demand for donor kidneys is large and growing, the current system cannot meet demand, and financial incentives would increase the overall supply of kidneys and thus save lives. We consider these claims in the context of the United States. While we acknowledge the plausibility of claims that incentives, if sufficiently large, may successfully recruit greater numbers of living donors, we argue that strategies compatible with the existing altruistic system may also increase the supply of kidneys and save lives otherwise lost to kidney failure. We conclude that current appeals to the life-saving necessity argument have yet to establish sufficient grounds to justify trials of incentives. 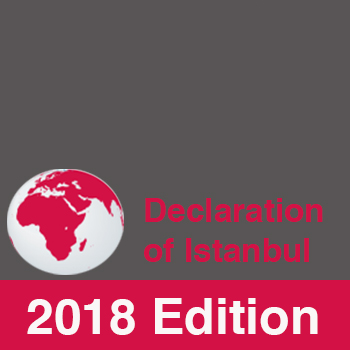 Translations of the DoI

The Declaration has been officially translated into the following languages:

The Patient Brochure on educating those planning on buying a kidney is available in many languages.

More information on how to endorse the Declaration of Istanbul here

The Declaration has been officially translated into the following languages: